Ammonia, which does not generate carbon dioxide when burned, is attracting attention as a gas suitable for environmental protection.
Due to its characteristics, its use in gas turbines and engines for ships and cars is being studied as a next-generation eco-fuel.
Other applications include chemical raw materials, refrigerants, fuels for thermal power generation, hydrogen storage substances, denitration, etc., and their applications and possibilities are wide-ranging.
For industrial use, it is often used for heat treatment of metal surfaces such as Nitriding.
As mentioned above, ammonia is a substance with various potentials, but there are some aspects that need to be handled with care, such as toxicity to living organisms and corrosiveness.
In addition, when used for heat treatment, etc., a stable supply of gas is required, but since ammonia has a high boiling point, it may not be possible to vaporize an amount that satisfies the gas consumption by natural vaporization. Frost on cylinders and tanks is common in equipment that consumes ammonia by natural vaporization. And thus Ammonia Vaporizer is required.

Based on more than 60 years of knowledge and experience in the manufacture and sale of LPG vaporizers, Kagla has developed a dedicated ammonia vaporiser that provides a stable supply of ammonia vapor.
While sharing the safety mechanism and operational stability with the LPG vaporizer, all the routes of ammonia gas are made of Stainless Steel, which is corrosion resistant, all welded construction, all flange connection structure.
EVA-AX5 is designed exclusively for ammonia gas users.

Advantages of Electric Water Bath type vaporizer would be controllability, vaporization stability and safety. Electric heater warms the water in the bath. And this hot water indirectly heats the liquid Ammonia running through the heat exchange tube.
As the heat source is hot water with a gradual temperature change, the vaporization ability is stable and controllable. And even if there is a problem with the heat source, the vaporization ability can be exerted while the water is warm.

As the Liquid Ammonia (NH3) is heated indirectly by the hot water, it is safer than Direct Fire type vaporizers. And generally, Electric Water Bath type can be installed much closer to the tank / cylinders. And its operation is noiseless.

Ammonia vaporizer EVA-AX5 has the corrosion-resistant structure consisted of stainless steel, rubber and valves including safety relief valve for regular material component in order to deal with the corrosive nature of Ammonia Gas.
Material on all gas route are stainless steel, all welded construction, all flange connection structure.

Electric Water Bath type vaporizer AX5 has Water Bath with Electric heater and the heat exchanger submurged in the water bath. The water temperature is controlled between 75-85℃ for stable vaporization.
Liquid Ammonia (NH3) goes into the heat exchange tube in spiral shape.
While the liquid goes through this tube heated in the hot water, it is vaporized and comes into the gas chamber.
And then it flows to the outlet for gas consumption.n.

FLOAT VALVE is a sefety function to prevent Ammonia liquid carryover to the consumption side.

Float Valve is a safety mechanism to prevent Liquid Carryover to the consumption side.
When the gas consumption exceeds the vaporization capacity of the vaporizer, Vaporization may not catch up with gas consumption by the combustion equipment.
In this case, the non-vaporized liquid Ammonia will come into the gas chamber.
The KAGLA Float Valve will be lifted upwards by the liquid and shut off the valve tightly with magnet connection.
This is a safety device that works reliably without using electricity or pilot air.
It also works in cases such as electric blackout, heater disconnection and others.

Due to the phenomenon that the liquid pushes up the float, the gas chamber outlet is closed by the valve at the top of the float and prevent the Ammonia liquid from flowing to the consumption side. Since it does not require external sources such as electricity or pilot air, it is a system that operates reliably under all circumstances.

Since a strong magnet holds the valve, some force is required to push the rod down.
If the reset rod cannot be pushed in at all, there may be liquid remaining in the chamber. Open the drain valve to check and release it if necessary. 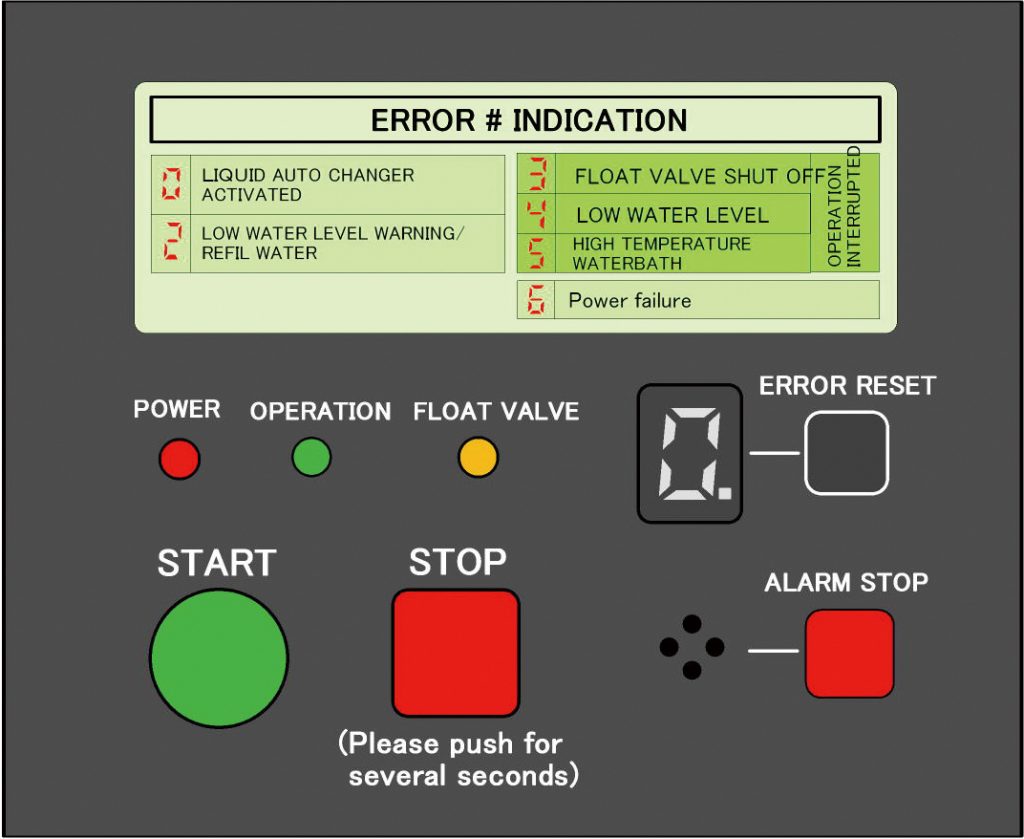 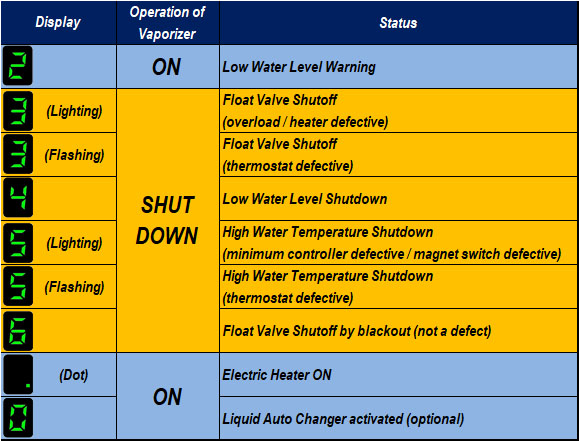 Cause of the problem and Countermeasure

For inquiries about products and services, please use the inquiry form.