What is Ammonia (NH3)? Why use Vaporizer?

1. What is Ammonia? – Basic knowledge

Ammonia (NH3) is a colorless gas with distinct odor. It is composed of single Nitrogen atom and three Hydrogen atoms. Boiling point of NH3 is -33.4℃. When vaporizes, a great amount of heat is absorbed.

Vaporization heat exchange of ammonia is the second largest after H2O. Compared to H2O that vaporizes at 100℃, ammonia generates a large amount of heat exchange at a low temperature of minus 33.4 ℃, and thus it is also used as a refrigerant. On the other hand, due to the large heat exchange of vaporization, if the heat source is not sufficient, vaporization becomes unstable and frost on the cylinder frequently occurs when gas is used for natural vaporization.
Ammonia, which does not generate CO2 when burned, has been attracting attention as a Green Gas in recent years, and more various uses are being studied.

2. What is the major usage of Ammonia?

Ammonia is seen in various field. It is a building-block chemical and a key component of many products including plastics, fabrics, etc. 80% of Ammonia produced is used for Fertilizer. More familiar use of ammonia is cleaning products for kitchen, bath, toilets and else.

And following are seen in the industries…

Ammonia is highly toxic and dangerous. And therefore it must be extra carefully to prevent gas leak.

Ammonia has alkaline properties and is corrosive. Valves, piping and the gas devices of LPG / NG cannot be used as they will be corroded. For safety operation of Ammonia, anti-corrosive material must be equipped.

4. Why do we need vaporizers for Ammonia?

Many of NH3 users take gas by natural vaporization from tanks / cylinders. If the consumption is not continuous and not in a large amount, this may be sufficient. 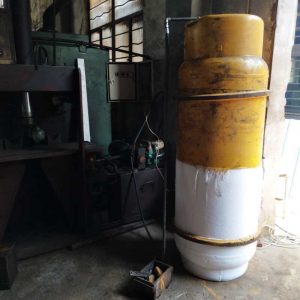 As mentioned above, Ammonia absorbs a large amount of heat when vaporizing. Therefore, if the heat source is not sufficient, vaporization becomes unstable and frost on the cylinder frequently occurs when gas is used for natural vaporization.

This picture shows frost on the Ammonia cylinder surface caused by too much heat exchange. When you see this, natural vaporization is not catching up with NH3 gas consumption. Vaporization is slowed down and thus Ammonia gas supply is not stable. You need to take some counter measurement or the business operation will be interrupted before long.

Put the cylinder in the water or pour hot water on cylinder? Effective but not recommendable. This will induces rust on cylinder by exposing to water. Cylinder would be damaged afterwards… What if Ammonia may leak?

Heating the cylinder with fire? NEGATIVE!! Too dangerous!

These cannot be good solution…

There are 2 other safer solutions against this problem of Ammonia vaporization. 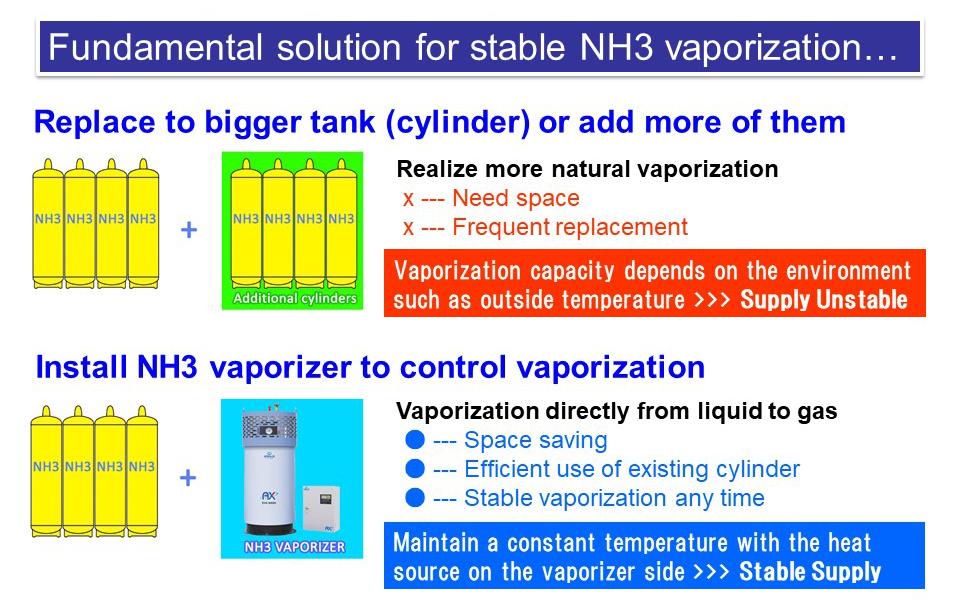 KAGLA’s Ammonia vaporizers are all designed in Anti-Corrosive structure. And the related Ammonia gas equipment are also available.